After a successful last season, Iron Claw Robotics is charged up for the 2023 Charged Up build season! On Saturday, January 7th, the team kicked off the season with much anticipation. The 2023 game is a pick-and-place game with two game pieces, cubes, and cones that robots must deposit on poles and steps. The endgame is a balancing ramp, similar to Rebound Rumble, but somewhat more manageable due to the two pivot points. 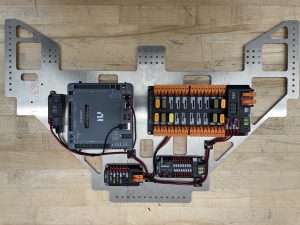 After devising game strategies and brainstorming the capabilities of our robot, power outages cut our first week short across Los Gatos, with a fallen tree cutting off power to Los Gatos High School for three days. This severely altered our schedule, pushing back the finalization of the prototype designs. Once we came back to school, we finished brainstorming designs and selected seven subsystems to prototype over the course of the week. We broke up the subsystems into three categories: arms, orienters, and grabbers. We are working on creating CADs for each arm, and the orienters and grabbers have been laser cut and are being tested.

In terms of the drivetrain, the team selected to go with a swerve as we concluded it will give the team an edge in playing the Charged Up game. The team used the offseason to build a swerve drive and get familiar with programming a swerve drive train for competition. Based on some of the potential choke points on the field, the team decided a smaller frame perimeter would be advantageous and settled on a frame perimeter of 104”. With bumpers, our robot will be 32.5” wide. The control system layout was finalized in CAD and we completed the fabrication of the belly pan on the router, and the assembly of the MK4i swerve modules with Falcon 500s repurposed from previous season robots. 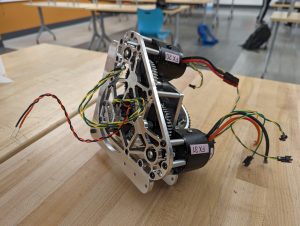