Week three was centered around prototyping, much like week two. To begin, we had two main indexing prototypes. One was shaped like a C, dubbed the reverse scorpion. Balls travel along a belt before being brought to a shooter. In the photo, our single flywheel shooter is pictured. The second indexing design was a rotating magazine of game pieces. Students were inspired by videos from other teams, one of which this prototype was directly inspired by. A rotating base brings balls to a spinning wheel in order to get the balls to eject into the shooter. 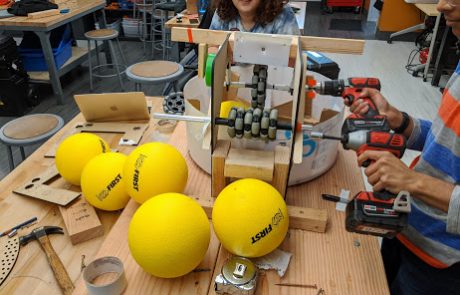 The laser cutter is still at work! Since we are in the process of mounting our single flywheel shooter on the rotating indexer for further testing, students have been using the laser cutter to get all of our parts done precisely.