Last weekend, our team traveled to Monterey Bay to compete in the Monterey Bay Regional. Unlike at Hueneme Port Regional, almost our entire team went to this competition. On the first day, the pit crew and drive team drove early in the morning to Monterey and set up the pits. Inspection and robot weighing went fairly smoothly, except for a camera module that was causing the current to not properly ground. In between the inspection, we finished attaching our climb mechanism to the robot and performed some system checks with the programmers to confirm that the robot was in working order. After this, we rushed to the game field to calibrate our robot for the field. Field calibration, something our team never had the chance to do in the past, was particularly useful for optimizing the consistency of our vision alignment and planning a precise autonomous sequence. 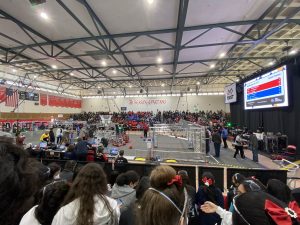 Afterwards, our drive coach and strategy lead toured the other pits at the competition to learn more about our competitors and their robots. They compiled a comprehensive list of teams’ match strategies and robot capabilities. When the practice matches began, our robot did decently well, consistently maneuvering a two-cargo autonomous routine, shooting several upper hub cargo in teleop, and climbing to the traversal bar. However, we were not able to shoot as consistently from the back of our robot than from the front, as the cargo repeatedly shot too far, missing the upper hub. We fixed this issue temporarily by slightly lowering the back shooting speeds, but when the problem reemerged a few matches later, we decided to only shoot from the front of our robot, which was more reliably landing cargo into the hub. 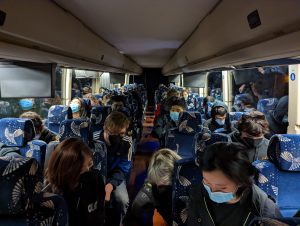 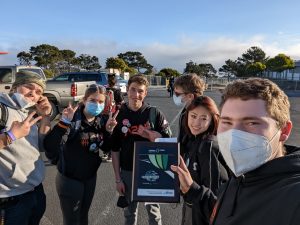 During the qualification matches on the next day, we started out losing a match, but then began winning the following matches. Our strategy involved scoring as many cargo as we could during teleop and then climbing to traversal at the start of endgame. We frequently drove to the launchpad to fire our cargo, both protecting us from opposing defense and occasionally landing us some free penalty points. In the pit, we agreed to always do a full systems check on the robot prior to every match. We noticed a recurring problem where every time we restarted the robot, mechanisms would seemingly randomly cease to function. We looked into the issue but couldn’t figure out how to fix it, so for the rest of the competition, we had to redeploy the code every time we power-cycled the robot. We were able to dominate in many of our matches and receive ranking points, even when our alliance members were having difficulty scoring. We quickly ranked up to fourth place and almost became third due to our consistent traverse climb, and reliable auto routine. During the playoff matches, we allied with teams 8 Paly and 8262 Jump Robotics to form the third-seeded alliance. 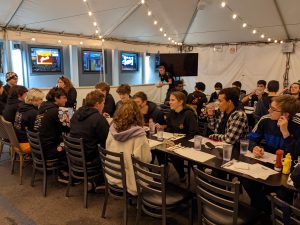 Although we were eliminated in the quarterfinals, the Monterey Bay Regionals was a worthwhile and prolific experience. We achieved our goals of becoming a top-eight team and gained insight on what we could improve in terms of design and strategy. Looking forward to the Silicon Valley Regionals!